On Thursday, we traveled by ferry from Salvador to the island of Itaparica and spent most of the day in a quilombo, which is a community where escaped enslaved people would build their homes and where their ancestors now live. One of the things we did in the quilombo was go to the place where manioc is processed. Manioc is a common plant that grows very easily in Brazil. We were able to see how it is ground up and made into different products, like flour and crackers. Also, we got to meet the people who were doing the process. It was very interesting to watch and the producers were very generous in giving us lots of samples to try! 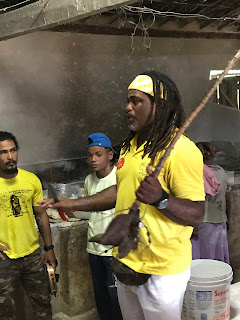 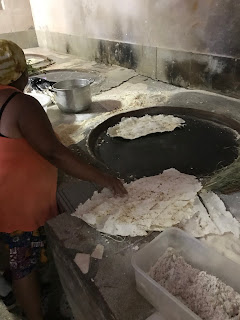 We went to a capoeira museum on November 7. In general, everyone had fun experiencing the Afro-Brazilian moves, such as kicks and cartwheels. Also, we interacted with the students by doing capoeira with them and trying to play the instruments that are heard when doing this sport. The instruments, such as drums and tamborines are used as a way of bringing rhythm to the moves. Along with the instruments, the students would sing about their ancestors together. Furthermore, it was one of our best days because we had the opportunity of learning about Brazil’s dancing and martial arts sport. 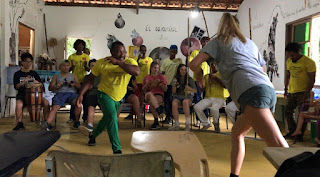 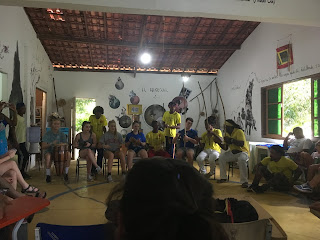 In the middle of the day, the NMH students entered a Candomblé house to meet with Mãe de Santo (Translated as Mother of the Saint) Juanice to better understand the Afro-Brazilian Religion. Candomblé is a religion originating in Africa and was brought over by slaves through the Middle Passage. Since then, Candomblé has grown and evolved throughout Brazil’s history and has cemented itself as a staple part of Brazil’s culture. During our visit to the house, Mão de Santo Juanice spoke about the different Ancestors, who are the deities of the religion, such as Iiansã the god of the storms, lightning and thunder. She also spoke about one of the rituals performed by those practicing Candomblé, which involves chanting in a circle and playing the drums rhythmically. Mãe de Santo Juanice mentioned how, often, these rituals were performed in secret to prevent outsiders from looking in on the tradition and believing that the practicers were crazy. By understanding the history and significance behind these rituals and the religion itself, the NMH students are making the most of their Brazil Cultural Trip. 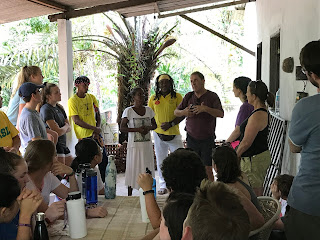 Apologies for the late postings--Internet connectivity has been a little weak.