Our first day in China’s famous capital was spent traveling to many famous attractions like Tian An Men Square, the Forbidden City, and China's National Museum. Leaving at 8:30 from our hotel we arrived at the Forbidden City or 故宫 (gu gong) at around 9:30. The Forbidden City was a place of rest for emperors up until the early twentieth century. Interestingly only the emperor and his servants were allowed to be inside of the City. Further more the inner part of the city, was only made for the emperor to be inside. Being inside of the palace was truly a amazing sight to see, with the sun beating down on each building it's gold colored shingles glistened beautifully through out our whole tour. The Forbidden City was also massive, stretching in almost a kilometer in length and 800 meters in width. All in all it truly was a spectacular sight to see. After enjoying the Forbidden City our tour guide Phoebe took us to see China's National Museum. China's national museum was extremely interesting as we explored its fascinating expansive exhibits. This Museum was especially special because it both covered ancient Chinese history, as well as relatively current Chinese history like the opium wars, and China's communist revolution. Later, we walked from the National Museum to Beijing's famous Tian An Men square. Tian An Men square or the "gate of heavenly peace" was built in 1415 during the Ming dynasty and was China's main political center. Although we didn't get to see it, Phoebe our tour guide explained to use that chairman Mao Ze Dong's body is currently buried in a building inside the square where it's preserved in crystal. Exhausted from such great first day we had an amazing dinner staring one of Beijing's most famous dishes, 北京烤鸭 (Beijing kao ya) or Beijing roasted duck. Exhausted from such an amazing day we eventually made it back to the hotel exhausted and ready to rest for for the next day. 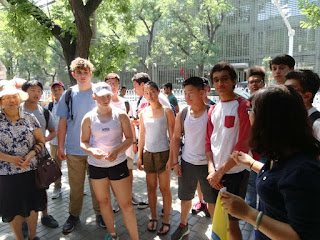 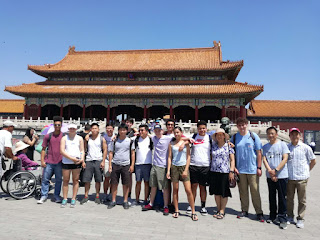 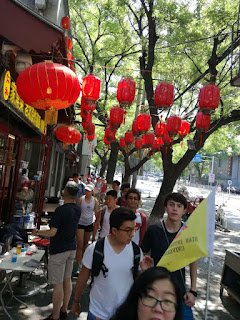 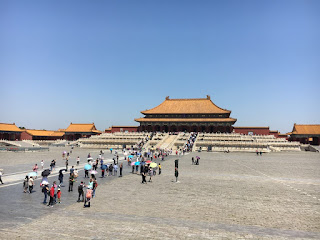 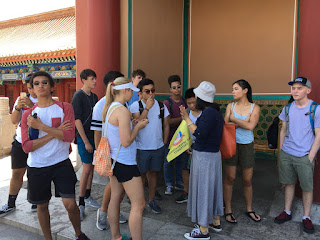 The next day, after breakfast, our group left at 8 from the hotel for the great wall. Everyone was excited as it is one of the greatest wonders of the world! Our tour guide Phoebe told us a very sad story about a woman who traveled to the wall to find her husband, only to find his dead body in the ruins of a part of the wall. This story was supposed to symbolize the amount of manpower that was put into building the wall. At the wall, we could see the sheer length of the wall, as well as the fact that the wall was built on mountains as well. We were told to climb the section we were at to the top, as Chairman Mao stated that "One who cannot climb the Wall is not a worthy human." The wall's hike was challenging with uneven steps and a hot sun. Most of us managed to make it to the top, and we could see a great view of the mountains, a railroad and neighboring town, and more of the wall. It was a truly breathtaking sight. 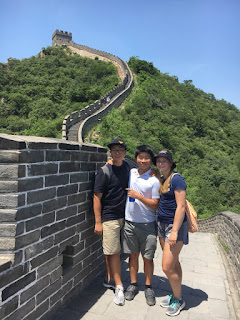 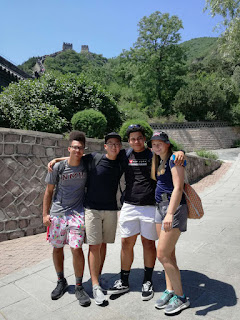 After the wall, we had a traditional Chinese lunch that had delicious food. Then we drove to the Summer Palace. There, we saw a huge lake that was man-made. It was the living place of Empress Dowager Cixi for a while, and it was beautiful and also a sign of human might. After this and a heartwarming dinner, we got to see a Chinese acrobat show which was a blend of Chinese and Buddhist symbolism and incredible stunts. There were interpretive dances,  motorcycle stunts, human pyramids and people simply achieving impossible heights.
On the third day we all tracked to the temple of heaven. The temple of heaven was mathematical brilliance. The architecture in the middle of the temple had stones in circular shapes that made rings of 9,18,27,36... until 81 stones as 9 is considered a lucky number in China. Beyond this mathematical magic, there was a feature known as the echo wall. When someone claps, the clap resounds back so clearly that one could confuse it for two. The Hall of prayer of good harvests, the largest feature of the temple, was absolutely stunning. The circular temple with both symmetric and asymmetric designs in perfect harmony. As we circled around the temple, it was as if the presence of a god was upon us. 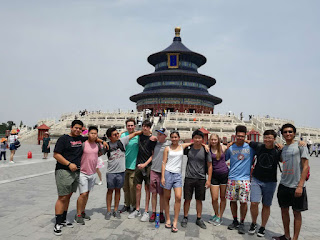 After seeing the temple of heaven we all went to a traditional Chinese tea house. We all sat around a round table and drank five different types of tea: wu long tea with ginseng, green tea, lychee tea, fruit tea, and Pu er cha. We were first given two cups, a very tall one and a normal size tea cup. Our first tea was first poured into the tall tea cup and then quickly dumped into the other cup. The then hot tall cup was used to smell the flavor of the tea. The warm tall tea cup was then rubbed between our hands to draw blood circulation to your hands. After, the lady pouring us tea explained what each tea was supposed to be drunken for. For example Pu Er cha is supposedly to help you lose weight. After drinking a variety of different teas and a delightful stay in Beijing we all caught an over night train to xi'an.