Connection issues have made blogging tricky, but but we’re looking forward to catching up.

We arrived yesterday, safe and sound—and tired!  After a robust and restorative tagine lunch at our hotel, several of the students showed their New England grit by going for a bracing swim in the [decidedly chilly] pool.  (The rest of us stuck to drinking water.)  We then walked into town and through the Assilah medina, catching a beautiful sunset along the way, and Kamila gave the first site presentation of the trip—on King Hassan II of Morocco. 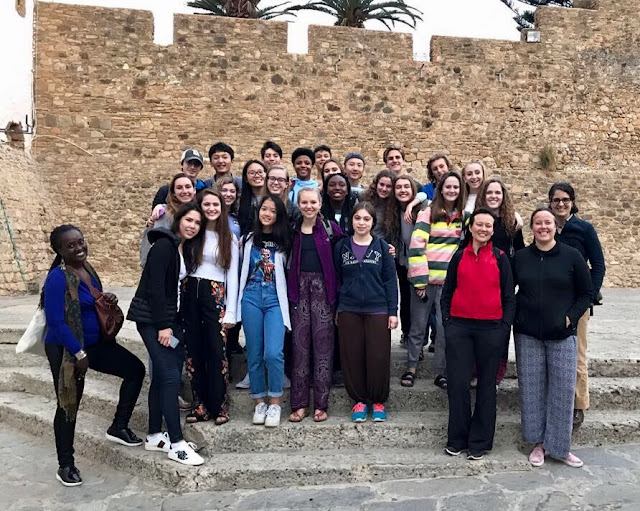 The evening brought a presentation from our local ambassador, Sara Kassir, on Moroccan language and culture, followed by a many-course dinner at a Spanish restaurant.  Everyone was quite ready for bed by the time we ended the day! We woke up much fresher this morning, grateful for a solid night of sleep.  After taking in a quiet breakfast––and discovering the magic of Moroccan mint tea––at our hotel in Assilah, we drove to Tangier, where we visited the Tangier American Legation Institute for Moroccan Studies (TALIM) museum, the Kasbah Museum of Mediterranean Cultures, and the Darna women’s center.  Along the way we took in the sights and smells of many, many market stalls; did lots of people watching; counted street cats until we lost count; discussed the juxtaposition of old and new architecture; noted many beautiful murals; and stopped at the top of a tall hill to have a look across the strait at the coast of Spain. 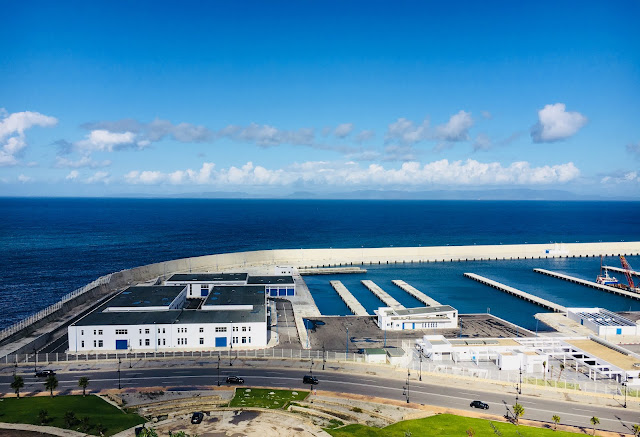 Over lunch at DARNA, we heard site presentations from Billy (Shipping in Tangier: Exportation Free Zone and the Strait of Gibraltar) and Marcus (Early civilizations of Tangier: Phoenicians, Romans, Vandals). 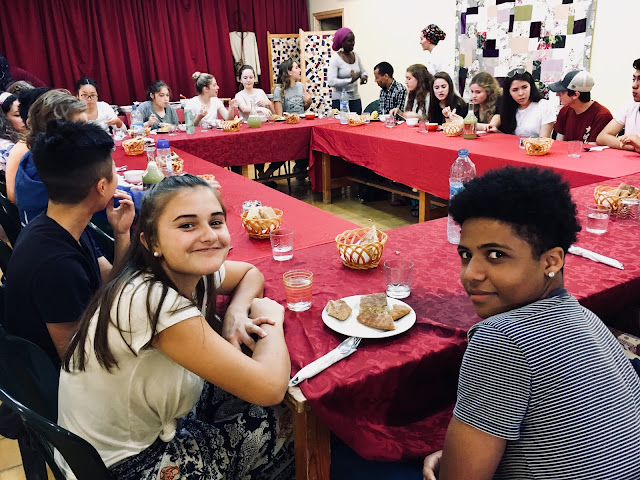 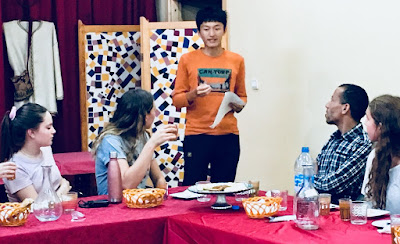 We finished the day back in Assilah with a walk on the beach, an excellent lecture from trip leader Javier Escudero on the shared history of Morocco and Spain, dinner, and an exhilarating performance of Gnawa music and dancing by a local group.  Philip Psaledakis, Skylar Nieman, and Sonia Hernandez will offer further reflections.

Today we went to two museums.  The first one was the Tangier American Legation Institute for Moroccan Studies, or TALIM.  It is the only National Historic Site belonging to the United States in a foreign country.  In it were many paintings showing Moroccan cultural interpretation, portraits of people of importance to the institute, many photos of Western writers and painters who lived in Tangier, and some diagrams of the War of the Three Kings.

TALIM is located in the building of the original U.S. Embassy in Morocco and was the first building on foreign soil that the U.S. owned.  This is important because Morocco was the first country to recognize American independence (in 1777).  The museum’s director, John Davidson, a former American diplomat, gave us a talk illustrating how Tangier has been an economically significant and religiously tolerant city throughout its history.  He also emphasized that Tangier has been truly an international city for many hundreds of years.  For example, after World War I ended and France and Great Britain partitioned Morocco into two respective parts, Tangier was not included in either protectorate.  Rather, it was declared “a city under international rule.”  So if you were British and living there, you would remain under British rule.  Likewise, if you were French, you were governed French laws.

The second museum we visited is called La Kasbah de Tanger Musée des cultures méditerranéennes.  It illuminated the long and complex history of the role of Tangier (and Morocco) as an interface between Europe, Africa, and the Mediterranean.

This museum is housed in the Kasbah Palace and showcased the blended architectural style of Morocco, including Arab and Islamic elements as well as, for example, Corinthian (Greek) columns.  When you enter the courtyard, you see it has rooms coming off from it.  These are very small, rectangular rooms, each of which houses a different historical time period.  The exhibit begins with prehistory and proceeds through Pre-Roman era, the Roman era, Islamization, the Great Dynasties (e.g., the Umayyad Caliphate), the funeral artifacts of Qsar Sghir, the Portuguese occupation, and finally the liberation of Morocco by the Alavite sultanate. 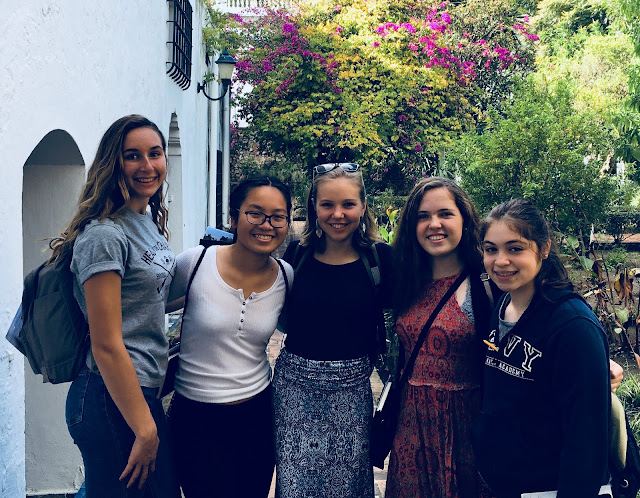 The final area of the museum was the gardens, which were designed and planted in a very precise and symmetrical way.  The gardens were very beautiful.

Both of the museums were interesting in their own ways and illuminated different aspects of Moroccan life and culture.  Like most places, Morocco’s history is much deeper than we as outsiders, tend to think.  It was cool to see how this history has had a physical and socio-cultural impact on the Morocco we visit today. 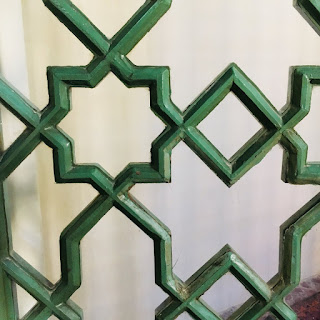 Reading about the role of women in Morocco is incredibly different from actually seeing it.  La Maison Communitaire des Femmes (DARNA) was not a museum, and it was not something you could just read about.  It was instead a physical place that is actively changing the role of women in Moroccan society.  We were able not only to meet the women leading the program, but also to see for ourselves the impact their work has on local women.

Upstairs in the small building were a few classrooms dedicated to teaching at-risk women to read and write as well as to craft their own textiles.  The center (known as DARNA) teaches women skills with which they can earn a living doing outside factory work or make their own goods to sell, supporting their families.

Many of the women served are single mothers whose families depend on them for financial and material support.  In Morocco, we were told, men are culturally less likely to be the sole or primary financial supporters of families.  All of us noticed the lack of men shopping in the market or picking children up from school.  Being able to physically purchase the products that at-risk women had learned to make finally made Morocco “seem real.”  Prior to visiting the center, I don’t think the reading I had done for my term paper on women’s roles in family and society had really sunk in.

The center also displayed images of the area where it is located before the program was created.  The buildings had been in ruins and the streets sparsely populated.  Now the area is filled with vendors and tourists.  Seeing the impact made by real aid for and connection with Moroccan women is definitely not something I could have just read about.

The performance by the Gnawa music group extracted a lot of feelings and a bit of nostalgia from me.  From our brief study of Sufi Islam in class, I knew that Gnawa mysticism would have a strong focus on music, since that is how many Sufi people  praise Allah.  However, I was not expecting the joy and comfort the music brought me.  Firstly, the rhythm of the songs consisted of a beat that was played very quickly, ra-ta-ta-ta-ta-ta.  The banging of the karkaba, which sounded very similar to Spanish castanets, was so powerful I could feel the rhythm in my throat. 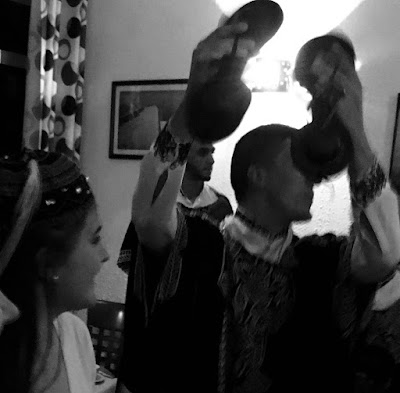 Secondly, the rhythm reminded me of a zapateado beat, which brought a multitude of memories from when I took Mexican tap dancing classes at age five.  The rhythm brought a smile to my face, as I was able to connect with a new group of people through six simple beats.  The encouragement from the musicians gave us to dance forced me to my feet to dance the zapateado, which I haven’t danced in ten years.  I was happily surprised that I remembered it.  I think the Gnawa dance ignited my muscle memory.

Although I was quite tired still from the trip here, the dance, music, and memories were definitely a highlight that brought our group closer to the locals and to each other.