Another busy day! Arriving in Xi’an at eight o'clock in the morning, the students dragged their luggage to the hotel and went to breakfast right after. Although the students spent their night on the train, feeling tired, the local tour guide rejuvenated the students with his dramatic tone and body language; the bus was full of laughter on its way to the famous Ancient City Wall.
The Shangxi History Museum was also one of the highlights of the day. According to the tour guide, it is the second largest museum in China; the Beijing National Museum which we visited on day 2 is the largest. In the museum, the girls bumped into the calligraphy site and were fascinated by the empowered strokes created under the brush.
On Sunday, the excited group finally visited the Terra-Cotta Warriors pits. In the first pit, said the tour guide, that if all soldiers were excavated, there would be approximately 6,000 of them. But since the warriors are really hard to preserve, only hundreds of them are dug out and put on display for the tourists. 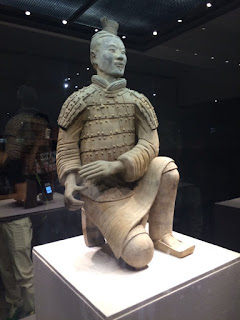 In the afternoon, the students went to the Muslim quarter in Xi’an and employed their wonderful bargaining skills on the commercial street! Here the students also saw a wide variety of things that they had never seen before--feet treatment by little fish, colored cotton candy in flower shape, Bian Bian noodles, etc. 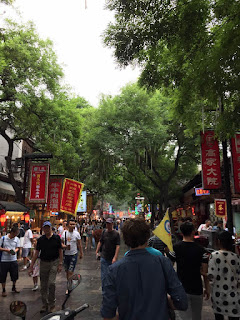 After a morning discussion, tomorrow we will be taking a high-speed train to the SIAS University in Zhenzhou where we will stay for twenty days for concentrated study in Chinese.